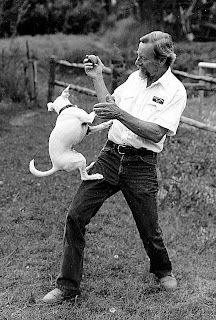 Radar Ward, a Chihuahua whippet mix of unknown origin passed away on September 15, 2011.  Born in 1996 in the wilds of Albuquerque’s North Valley, he spent his formative years wandering solo until a potent combination of fate, luck and horse sense brought him to the Ward family.
The small white dog, dubbed “Radar” in tribute to his outsize ears became the immediate friend and muse to artist Ross Ward.  The inseparable buddies spent many happy hours sun bathing, catnapping and perfecting the mid-air tennis ball catch.  Proclaimed “best dog in the world,” Radar became the subject of a series of late career paintings by the artist where he was depicted as a bright spirit of hope and once as The Pope, himself.
Radar’s dedication to the creative genius only deepened as Ward battled Alzheimer’s disease.  Whether sharing a table, a bed or a particularly warm patch of sun, Radar rarely left Ross’ side and seemed to share a freeflowing path of communication with the artist long after words had been lost.
With a bouncing step and a jingling collar, Radar brought great joy and comfort to Ward and the many other residents of the Manor Care Alzheimer’s wing.
After Ward’s death in 2002, Radar continued to live with Carla Ward in Sandia Park, as Mayor of Tinkertown Museum.  After a full season of meeting and greeting visitors from all over the country, Radar spent winters relaxing in Phoenix, Arizona.  Vacationing in the shadow of Camelback Mountain, Radar developed a taste for organic chicken and long hikes in the desert.
During his tenure as Tinkertown Mayor, Radar was the inspiration and star of the picture book "Emily Finds a Dog," written by Carla Ward and illustrated by Megan Ward.
Radar is survived by feline friends Franny and Zooey, devoted humans Carla Ward and Eric Rasmussen and legions of loving fans.  This best dog will be greatly missed.
Posted by Tanya Ward Goodman at 9:31 AM 6 comments:

Happy father's day. Found myself telling lots of stories today. Wondering if my son was old enough to whittle. What my dad used to call "parking lot pine" is good whittling wood and the name made my son say, "what the ( mouthed hell) is that?" He giggled hysterically over the silent swear word and my non-reaction to it. I'm hard to shock and part of that is thanks to my Dad and that makes me a good Mom and for that (and a million other reasons) I am grateful to my Pop. I miss him still.

My own husband, the father we celebrated today, is a good man in more than name. He deserves a day all to himself. All parents do. More than one.
Posted by Tanya Ward Goodman at 7:51 PM No comments:

I spent today doing mostly things I love.  I wrote some and walked in the bright spring sun.  I tickled the kids and made up silly songs.  My daughter and I had a sword fight with cooking tongs and socks and my son laughed the high cackly laugh that lights me up like a string of Christmas lights.

It was a great day.
Posted by Tanya Ward Goodman at 7:48 PM 2 comments:

It's as easy as riding a bike.  But is it?  I've just spent forty minutes trying to remember how to inflate the tires on my bike.  Granted, I haven't ridden the darn thing in a year and it's got those tricky little Presta valves, but I'm still a little abashed by my need to watch a tutoring session on tire inflation on YouTube. (Thank you, cute bike guy, for all the info.)  Inflating the tires on my bicycle is not the only thing that I've forgotten.  I forget regularly how to pay my bills (some of them are paid online through the bank, others come out at intervals through auto withdraw and some I actually have to sit down and write a check.)  I've written a list of how and when all these things happen, but then I forget to look at it.  I forget the passwords to my various online accounts (why in the world do I need a security question to buy a top from J. Crew?)  I forget what book I'm reading and then when I remember the title, I forget where I am.  In all the catching up, think I probably read each paragraph five times.  And then, when the book ends, I promptly forget all about it.

Am I overloaded? Under brained?  Sometimes I worry about Alzheimer's.  But mostly I figure that there's a lot going on.  With over forty years of stuff crammed into my cranial file drawers, things are getting a little crowded, a little dusty.

Besides, I can remember how to make a souffle, how to saddle a horse, how to make paper dolls for my daughter.  For everything else, there's a recipe book or a cute guy on YouTube.
Posted by Tanya Ward Goodman at 9:57 AM 1 comment:

I'm up at The Next Family
Posted by Tanya Ward Goodman at 8:50 AM 1 comment:

Spring is here.  I can feel it.  The park is lush and green and filled with flowers.  The scent of orange blossom drifts in the air. The sun feels warm and the sky is still blue blue, not the smog tinged blue gray of summer heat.  I love Los Angeles in the spring when the stiff branches of trees fluff out into blossoms the color of prom corsages and the earth is plump and damp from rain.  Grass grows overnight, spreading a dense emerald carpet over hills that will, too soon, turn crackly and brown in the summer sun.  Too soon there will be fire danger and baked hard clay beneath my feet.  But for now, the moist air adds an ever so slight curl to my fine, straight hair and bright orange poppies spruce up even the most bedraggled median.  Spring in the air.  Spring in my step.
Posted by Tanya Ward Goodman at 9:49 PM 2 comments:

Fried rice for a new year

My daughter cooked dinner tonight.  Fried rice in celebration of the chinese New Year.  She and I were both born in Monkey years.  She tells me that means we are both "problem solvers" as in we know the answer to nine times one-hundred and five.  She doesn't, though, and I really have to think about that one.  The problems we are made to solve are not, perhaps mathmatical problemes.  Tonight (as I do most nights) she solved the problem of dinner.  She took the factors of left over rice, a bag of carrots, some purple cabbage and the chicken from two nights previous and she added them until they equaled dinner.  It was good.  What was better was watching her take charge of the big bowl of rice, seeing her happy smile as she dished out seconds (and thirds) to her brother.  My husband (because he was born in the the steady year of the Ox) took this on as a teaching moment.  He asked her to notice how happy she felt as the cook whose dinner was eaten with happiness and delight.  He asked her to put herself in her mother's shoes (her mother who is often the cook).  "Isn't it nice," he said, "to cook for happy eaters?"
"I know," she said.  "I know what you are trying to do."

We monkeys are problem solvers, but we are also problem makers.  We can't seem to help ourselves.
Posted by Tanya Ward Goodman at 8:50 PM 2 comments: