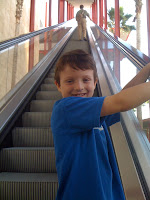 Took the kids to LACMA yesterday on the first of what I've decided will be "Terrific Tuesdays." Thanks to constant LAUSD budget cuts they get out of school early on Tuesdays and rather than spend these extra hours battling over who gets to watch television and why can't we play computer games until nightfall, I thought it would be good to get out in the world and take advantage of some of the wonderful things Los Angeles has to offer.

I chose LACMA for our first adventure because I wanted to check out the brand new Lynda and Stewart Resnick Pavilion where there is currently an exhibition of gigantic stone carvings from Mexico. I thought the big primitive heads would be a source of great delight to my children, but they gave them only a quick glance and then headed into the costume exhibit where they oohed and ahhed over hoopskirts, bustles and corsets. My son chose a fox hunting costume complete with top hat and crimson tailed jacket as his favorite while my daughter gravitated toward the all white lace dresses from the 1800s. We made a quick run through the decorative arts exhibit and I asked pointed questions about the differences in the bronze sculptures of Roman gods and godesses and the big, crudely carved stone heads.

"They're all people," my son said.
True enough.

The real treat for my kids was the bright red escalator that ascends three stories up the side of the new building and affords a terrific view of the surrounding neighborhood. They also greatly enjoyed the gigantic glass elevator in the Broad Contemporary museum while being only marginally impressed by the Koons balloon dog. We wondered why the inflatable pool toys stuffed into ladders and chain link fences were art, until a guide informed us that the toys were actually made of metal and painted to look like plastic. This crazy Koons magic trick was enough to temporarily "wow" the kids until my son started to wonder "why in the world you'd want to make an inflateble about 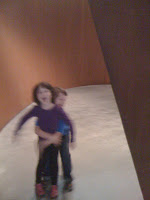 of such heavy stuff as metal."

We made a quick trot past the Picassos, a Matisse mosaic, a Rothko and a couple of Pollacks before my son drew up quickly in front of a troupe of emaciated Giacometti sculptures.

"Hey, we've seen these before."
"Yes?" I said. "Do you remember where?"
"They live at the Norton Simon," he said.
"That's right," I said. "They were made by an artist named Alberto Giacometti."
"He is a good artist for Halloween," my daughter said.
"Because these people are a little like skeletons?" I asked.
"No," she said, rolling her eyes. "Because Jack-O-Metti is like Jack-O-Lantern." 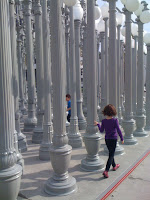 Outside, we counted the streetlights in the arrangement dubbed "Urban Light" by Chris Urban. My son estimated somewhere between 175 and 200 while my daughter methodically counted each one and arrived at 21-Million-billion. (Later, because I like to know these things, I looked it up. There are actually 202.)

We ran across the rain sprinkled grass and checked in with the Mammoths in the tar pit (still stuck.)

In two hours, we saw more "official museum art" than I saw in my first 10 years of life.
"What'd you think of the museum?" I asked as we braved the rainy afternoon traffic jams along Beverly Blvd.
"Boring," my son said.
"I liked the elevator," my daughter said.

Terrific Tuesdays. One down. Hundreds to go.
Posted by Tanya Ward Goodman at 9:34 AM 2 comments:

Email ThisBlogThis!Share to TwitterShare to FacebookShare to Pinterest
I'm over at The Next Family!
Posted by Tanya Ward Goodman at 8:38 AM No comments:

Two posts in other places and not a lot of posting here.

(Instead of posting today, I've pruned all our trees, researched tree scale, placed a bunch of items on craigslist, sorted American Girl clothes and doo-dads into baskets, printed out my credit report and taken the dog for a walk. This is to make up for the fact that yesterday, all I did was eat ice cream out of the carton with the freezer door open.)

The Smartly
Posted by Tanya Ward Goodman at 12:22 PM No comments: