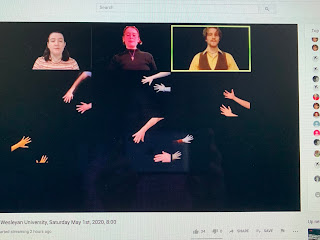 Well into my sixth week of hunkering down, my appreciation for everything and everyone in the outside world has only expanded. I want to write a love letter to staircase handrails, public water fountains, and the the deli department number dispenser. I could throw a parade for popsicle vendors and the counting of coins on an open palm.

The longer I stay in, the more my nostalgic bubble widens, encompassing not only chance encounters with friends at the market, but the ability to stand contemplatively in the cereal aisle. I am wistful for the way our bodies once moved through space with ease and unconscious comfort.

I am so aware now of the physical action of being in the world.

For instance, inside my house, I rarely wear shoes and so my feet have become sensitive to the texture of wood floors, tile, driveway cement, grass. I can feel the need to grab the broom before my eyes even see the evidence of this need.

I am feeling everything.

Some years back, I saw a play called “The Method Gun,” created and performed by RUDE MECHS, the Austin based theater company. It has stayed with me in the way a dream does: images, emotion. On Saturday afternoon, I settled at my desk for a live performance of “The Method Gun,” by the Wesleyan University Theater Department. I’d seen mention of the play on Facebook and, in this time of no-schedule, I made extra effort to mark my calendar. I felt an outsized desperation to be there in the moment, while it was happening.

At first, it was hard to settle. A little sweaty from a late afternoon neighborhood walk, I guzzled water and rolled my neck. My desk was a jumble of papers that called for shifting and inspection. On screen, other watchers were exchanging greetings on the message board. Though I often eavesdrop on these pre-show conversations from my seat in an actual theater, I wasn’t sure how to respond to the open nature of this exchange. Without the boundaries of convention and physical space, the invitation was equally weighted between listening and participation. In the online chat box, there are no side conversations.

“The Method Gun,” centers around a theater company dedicated to indefinite rehearsal despite the disappearance of their leader and the absence of a performance date.

In the Wesleyan production, a group of college students under the compassionate and dedicated direction of Katie Pearl, found a way to create something meaningful despite a pandemic.

The play is about the value of an ensemble without a leader; it’s about the merit of a piece of work (in this case, “A Streetcar Named Desire,”) without its main characters.

What (or who) is missing? How can we fill the void?
These are the questions of my (our) days.

On the home front with my husband and our two teens, we have become our own theater company. We are taking on all the roles. We are stretching in some ways and shrinking in others. My son has been folding laundry. My daughter has learned to cook. We all clean the house, care for the dogs, and take turns playing curator for an ongoing family film festival. Though we find our own corners in the house, our awareness of each other is heightened.

At my neighborhood Trader Joe’s, spray painted lines separate us in the parking lot as we wait for our disinfected cart. Inside the store, brightly colored directional arrows mark routes throughout the store. Small, squares of blue gaffer’s tape indicate where I should stand at the checkout counter. Signs everywhere ask us to be aware, to keep our distance. It’s still confusing. No one has had enough rehearsal. This new choreography has not yet settled into our muscles.

The actors in The Method Gun started their rehearsals in a theatre. They stood next to each other. In the same room.

In the nine small squares of Zoom, the actors led their audience through “Paperboy into Flower seller.” The paperboy was center square. We were paperboy POV, responding to Blanche, though we didn’t hear her lines. We saw her actions. Her hands. Her mouth. Her gestures, unfurled around the paperboy like flowers as eight pairs of hands reached for a cigarette, (inhalation, exhalation,) reached to touch. Lips moved in for a kiss. The paperboy, his eyes closed. Me, at home, eyes open. The screen went black. This moment of physical intimacy was (is) impossible to witness.

At Zoom meetings, I sit at my quiet desk, while other mothers lean over kitchen counters, their faces bobbing in and out of frame as they tend to their children, chop vegetables or shout direction to unseen others. Dogs and cats often make guest appearances. Once there was a guinea pig. My own daughter sometimes hands me a bowl of noodles or fruit or cereal through the door of my small office and I reach off screen to accept her offering.

Toward the end of the play, everyone started to break down. Someone shouted.
The approach is bullshit. Everything we’ve done is nothing.

Once every few days we feel the same way. This lock down. These guidelines. The careful structure of our days. The way, no matter how much we sweep, the dust and dog hair continues to gather on the floor.

In “The Method Gun,” the company performs Streetcar as a stunning series of near misses. The staged version involved bodies moving around the stage amidst swinging lanterns. I remember sitting in the theater next to my friend. I remember how the rhythm of the scene (the sound of a metronome) began to inhabit my body.

Is my heart beating? Are my lungs taking in air? Did my fingers brush the fingers of the cashier at the market? A door knob. An envelope. A light switch. A stair rail.

My office is just off the kitchen. My husband was beginning dinner preparations. He was talking to me from the stove. His back was to me. He didn’t realize I was crying. I was sitting at my desk watching these young actors on the screen of my computer. The sky outside was glowing with the last of the day’s sun.

The next part of the play is as much for us as it is for you.

Arm around Steve. Arm around Pablo. Run down the rake. High-five Steve. Near miss. Give Steve a hug. Break away. Near miss.

Maybe it was the young faces of the actors, so close to the age of my own children who, over these two months have grown in ways I can see (over an inch in height) and in other ways I can only intuit. Maybe it was the audience member who typed, as Blanche was taken away, about the experience of the first responders. Maybe it was the gesture of hands reaching across the darkness. Maybe I needed a good cry.

I was in my seat for this performance. I was surrounded by theater goers. And I was so grateful to be there.

You can watch The Wesleyan Theatre Department Production of "The Method Gun," here.

What a wonderful piece. Thanks for sharing. I am feeling the same hyperawareness of my body in space when I am out. Stay safe, friend!

A beautiful response to an astonishing piece of theatre. The young actors brought such life, such presence, to a medium that would seem to defy presence. Thanks for your contemplation and appreciation.