This morning, my mom sent me a photo of some pot holders she was going to turn into masks. I told her I’d sew her a mask and drop it in the mail. She taught me to sew and while I don’t do it enough to be very good at it and it always takes me about fifteen tries before I remember how to thread the thing or how to fill the bobbin or how to adjust stitch length, I can usually make something simple and reasonably tidy. It’s busy work and brain work and I am in sore need of both.

My dad would’ve been 80 years old today. He’s been gone nearly 18 years and we still talk about him and think about him and it’s like he’s here and not here. As is our habit, we are having green chile cheeseburgers for dinner. I thawed some meat and some Beyond meat for the vegan in the family and I defrosted some green chile that I keep in little cubes in the bottom of the freezer. 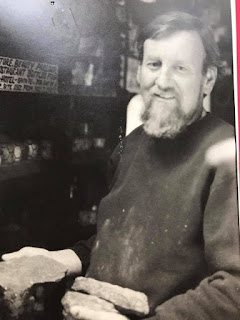 Green chile was one of the few items I bought at the grocery store a few weeks ago when I didn’t realize what was really happening. Everyone was filling their carts in slow, polite motion. Everyone looked a little worried, but their eyes held not a strategic gleam nor outright panic. We were all toddlers that day. Curious, clueless, trying to base our actions on the models around us.

I didn’t want to be too alarmist so I bought some kale and some spinach and some milk, a small bag of flour and, at the last minute, and just because I happened to see them, three cans of Hatch chile. Now I long for that day. When I could have casually added baking soda and wheat flour and strawberry jam. I might have looked for tinfoil or rubber gloves and things to make Easter baskets for the kids. 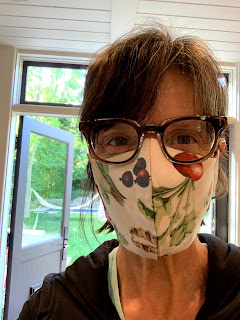 We’re living in a paved paradise now. Every day thinking about what we had and what is gone. Trying to make do and get through.

I sewed four masks today – three for a friend of mine and her dear daughter, and one extra for my own dear daughter who is keeping sane by walking up and down our block or sitting on a beach towel in the drive way. Today she made some tomato soup from a recipe she found on TikTok. She made a date shake. She took some selfies and tied her long, thick hair in a knot.

My son is waging a D&D campaign with his friends on the computer. Later, he plans to watch a movie with a bunch of other people on the computer. He lives in his pajamas. He eats toast and gives me bear hugs and leaves his cereal bowls in stacks on his desk.

Eighteen years ago, my dad was alive and my son was floating in my womb and I felt as out of control and as in control as I’ll ever be. Change was rattling the windows and shaking the walls.

My husband mentioned how present my Dad still feels. “The kids know him,” he said. “He’s like… around.”

I think he’s around because we ask him to be around. We conjure him with stories and with devotion to the objects he’s made. We delight in the things that he found delightful. In Albuquerque, my brother threw some burgers on the grill for lunch. Up in the mountains, my stepmother and her neighbors have gathered as close as they can to do the same. In Morocco, our friend Autumn is eating a green chile burger. Dad is nowhere and everywhere.

Dad was the king of keeping himself amused. There was not a restaurant placemat that didn’t turn into a sketchpad, not a stick of wood that couldn’t become a face or an animal or a mermaid with outstretched arms. He turned the newspaper into magical, growing eucalyptus trees and refrigerator leftovers into both dinner (Smosnane Moosenose – a favorite with Klondike Prospectors) and fodder for bedtime stories.

Tonight, green chile cheeseburgers, Bob Dylan on the stereo, beer in a glass. A toast to my Dad and a toast to all of us, keeping on, holding the talismans, creating the rituals, telling the stories.
Posted by Tanya Ward Goodman at 5:49 PM

Found your blog and was drawn into your love story to Ross and your fond memories.
Life and death are intertwined and your beautiful writing brings that truth together.
Wishing you and yours all that's good during these strange historical times.