I know what I know.

Last night, while I was making dinner, I used a salad spinner that I bought at the 99Cent Store in Silver Lake back in 1992. 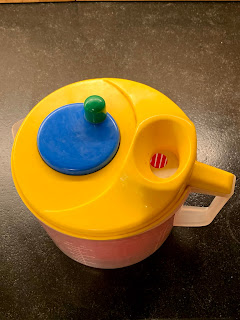 While I was making the salad, we were listen to Paul Simon’s Graceland. The album had been mentioned in an LA Times article featuring albums to listen to during this time of hunkering down. My husband is trying to find some structure. Reading the newspaper and taking part in all the offerings of communal engagement is one way to do that.

Graceland makes me think of my freshman year of college when a dear friend sent me the cassette and I listened to it approximately one million times. When I listened to Paul Simon’s sweet voice last night, I marveled at his magnificent metaphors and wept a little as I stirred the risotto. My own son will be a college freshman in the fall. How is this possible?

It is possible because time passes and that is one thing we know.

I’ve been keeping track of the things I know and using them as anchors or stepping stones. Or maybe a better metaphor is the planks in a swaying, decrepit suspension bridge. I’m not looking down at the chasm. I’m keeping my eyes up and I’m putting my feet down on the the known when I can.

Here’s what I know right now: last night, my son did the supper dishes while Prince sang “Let’s go Crazy.”

Yes. Let’s. (But just a little.) Because here’s what I also know: there is milk and cereal for breakfast. There is bread and butter for toast. My dog is out of his skin with joy when I pull the leash from the closet even if a few moments later, he’s dragging his feet on the trail. He’s willing and reluctant and so am I in so many ways.

I know my boy will go to college. One of these as yet unvisited, untested places will be a vessel to hold my kid, a petri dish of experimentation and growth and magical transformation.

And if it’s not. Perhaps, later, when he leaves the dorm and strikes out on his own and he moves into a place that seems a little run down, but the landlord says it’s okay to paint the wood floor and it’s okay to have a cat and it’s okay to leave the windows open all night, then this is where he’ll start to grow.

Or, maybe, (and this is where I get all hopeful,) he’s growing now.

My daughter has used this time to transform her bedroom from the space of a kid to the space of a young woman. (She will be so grossed out by that sentence when/if she reads it and that’s okay with me.) She’s painted white over the pale blue of six years ago, and, yesterday, I helped cram a menagerie of stuffed animals into an oversized, black plastic bag. Though I have a strange aversion to plush, and have been trying (with little success) for years to limit the collection of stuffed animals, it was hard to press the flat of my hand over these cheery familiar faces. I looked away from their bright plastic eyes and let this collection of childhood friends become one cumbersome body that we lugged down the stairs and crammed into a bin in the garage. I sat on the bin to get the lid to close.

I saved two old friends. A squirrel named Squirrel and a bedraggled tarsier named Little Freak. Liberated from the anonymity of the pre-school toy box, Squirrel lived a flamboyant life in my daughter’s company. His companion, Little Freak was given numerous hairstyles and was loved into a grubby, matted nub. Did I save them because they were the most eccentric of the animals? Because their diminutive stature reminds me that my towering daughter once had the smallest of hands? Was it the curious light in Squirrel’s button eyes or the windblown ear-hair of Little Freak? 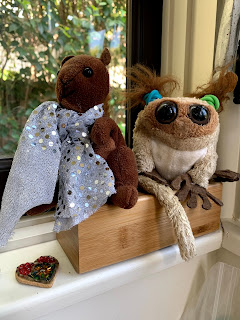 Posted by Tanya Ward Goodman at 10:41 AM